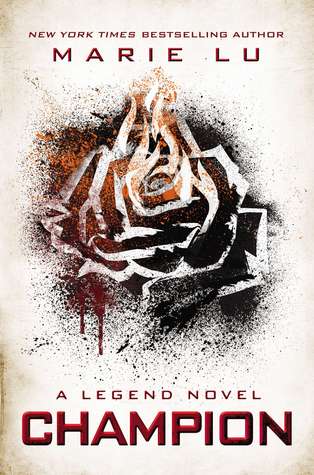 “The explosive finale to Marie Lu’s New York Times bestselling LEGEND trilogy—perfect for fans of THE HUNGER GAMES and DIVERGENT!
He is a Legend.
She is a Prodigy.
Who will be Champion?
June and Day have sacrificed so much for the people of the Republic—and each other—and now their country is on the brink of a new existence. June is back in the good graces of the Republic, working within the government’s elite circles as Princeps Elect while Day has been assigned a high level military position. But neither could have predicted the circumstances that will reunite them once again. Just when a peace treaty is imminent, a plague outbreak causes panic in the Colonies, and war threatens the Republic’s border cities. This new strain of plague is deadlier than ever, and June is the only one who knows the key to her country’s defense. But saving the lives of thousands will mean asking the one she loves to give up everything he has. With heart-pounding action and suspense, Marie Lu’s bestselling trilogy draws to a stunning conclusion.”

So last week I finished the third and final book in the Divergent series (Allegiant). After its bittersweet ending, I was terrified to read the third and final book in Marie Lu’s Legend series, Champion. Like Divergent, Legend has been rife with grim drama, nail-biting action and heartbreaking tragedies. But, unlike Divergent, Legend has had two protagonists that I really cared about–Day and June. I couldn’t bear the thought of these likeable, cheer-worthy characters meeting a similar ending as Tris and Four. I just couldn’t.

But, I went ahead and read it anyways.

And, without giving anything away, here’s what I thought:

As I’ve mentioned before, I feel many series suffer from the “Woo!-Boo! Syndrome”. Woo! for book one, Boo! for book two, and Woo!-Boo! for book three. Great, bad, great and bad. Champion was mostly Woo! Day and June were as likeable as ever, the plot answered all of my questions, and the grim yet optimistic tone matched that of its predecessors. Champion was entertaining, endearing and filled with plenty of oh-god-oh-god-oh-god moments. And Day’s headaches could literally be felt. During his painful episodes, I’d have to stop and rub my own head, scared I too had a tumor about to blow. Overall, I thoroughly enjoyed it. It was a fitting finale to an outstanding series. I highly, highly recommend it to one and all!

Now, as for the ending, the one I feared would be wrought with tragedy and noooooo!…Well, you’ll just have to read Champion to find out. I’m not telling! 😉

“Sometimes, the sun sets earlier. Days don’t last forever, you know. But I’ll fight as hard as I can. I can promise you that.”