It’s taken me longer than I planned, but I finally saw The Book Thief last weekend. I grabbed a bucket of popcorn and a box of tissues and sat back to–hopefully–enjoy one of my favorite books on the big screen. 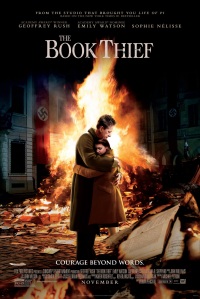 As a whole, I did enjoy the film. I feel the adaptation was true to the book and brought Himmel Street to life beautifully. And judging by the round of applause inside the theater at the end, I’d say other fans enjoyed it too.

Probably the best and most spot-on part about the film was the cast. Sophie Nélisse as Liesel was amazing, and Geoffrey Rush and Emily Watson as Hans and Rosa were exactly as I imagined them. And–just like the book–my favorite character was Rudy. In fact, I might love him even more after seeing the adorable and endearing Nico Liersch play him. (I just want to pinch his cheeks!) 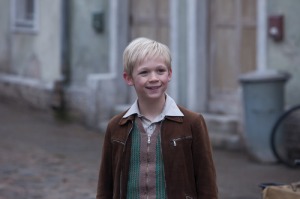 Okay, now for a couple of things that…disappointed me. And let me preface this by saying 1) These are nit-picky complaints coming from a book lover’s perspective, and 2) Despite these complaints, I still give the film two thumbs up.

First, was Death’s downgraded role. In my opinion, one of the best parts about The Book Thief was Death’s unique narrative. It added such an eerie tone and impending sense of doom. And although the movie opened with Death welcoming us, it quickly faded into the background and only returned here and there. This caused the movie to fall a bit flat for me. Without the ongoing presence of its morbid storyteller, the story just wasn’t as dark or suspenseful or special as it could’ve been.

(If haven’t read the book or seen the movie (and plan to), don’t read this next paragraph).

Second, was Rudy’s death. One of the worst and best parts of the book was its horrific ending. I knew the moment Hans said goodnight to Liesel and left her in the basement that I was going to need my tissues. And, trust me, I used them. BUT my tears were staunched when Liesel ran to Rudy’s body amongst the rubble, shouting his name and begging him to open his eyes–and he did! Whhhattt? Okay, okay. I know what you’re thinking: “What’s the big deal? So what if Rudy lived an extra couple of hours than he did in the book? He still died and it is still awful.” And yes, it is. But, for me, Rudy’s death was one of the most haunting scenes in the book. The way Death embraced his soul and took extra care of it was both tragic and comforting…I also felt his death scene was on the melodramatic–even cheesy–side. When Rudy opened his eyes and gasped, “Liesel, I have to tell you…” and then died, I felt more amused than sad. It just seemed so cliche and predictable.

Okay, I’m done complaining. Back to the positive.

Overall, I’d highly recommend this film to both fans of the book and those who’ve never heard of it. It’s a remarkable story that stays with you for days–weeks–months–years after reading/watching it. So don’t miss out!

And, seriously, go read the book if you haven’t. It’s. Amazing!