This weekend I was working on my manuscript when it suddenly occurred to me: I look like a complete moron when I write. I’m not talking about the way my lips move as I re-read my pages, or the way my eyes glaze over when I drift off into the Never Never Land of my imagination, or the awesome way my face screws up when I smash into a plot wall. No, no, no. Those are merely dull ticks and nuances, ones I’m sure most writers experience.

I’m actually talking about my “method writer” moments. You know, the times when I shed me and transform into a character to understand them better–portray them better–write them better. If there was a hidden camera in the room with me then…Oi vey! I’d be so mort-i-fied!!

Let me explain what I mean.

I have to believe that all writers are actors on some level. After all, we are creating new worlds filled with new characters with varying personalities. We have to have the ability to open our minds and become someone else for a spell.

Personally, I like to take my manuscript and pretend it’s a script, especially when I’ve hit a rough patch and I’m not sure how a chunk of dialogue sounds. I sit up in my chair, give a firm throat clear, and reach for my inner Meryl Streep. Then I begin to recite my characters’ words. I dramatically raise my voice when someone SHOUTS! Or lower it to a faint hush when someone whispers. I growl, I sigh, I mumble, I curse…Whatever the “role” calls for, I play it accordingly. And I’m confident my renditions are always worthy of an Academy Award. 😉

Fear not, Meryl. Your job is safe.

2. I like to pretend I’m a martial arts whiz

Everyone loves a good fight scene. However, mapping out a confrontation on paper isn’t as easy as it seems. What makes sense in my head probably doesn’t make sense in reality. That’s why I like to stand up and physically plan it out–strike for strike, blow for blow, kick for kick. For example, in one of my manuscripts, I had a villain who was nifty with a knife. She was very graceful and very deadly. And her fight scenes were particularly challenging. To choreograph them I’d go into the kitchen, grab a butter knife, and spin around my living room, pretending pillows and chairs were targets.

I know, I know, it sounds brutal. But I assure you, if anyone happened to walk by and peer in my window during those “violent” moments, all they’d see was an idiot doing a jerky, awkward dance with a butter knife in her hand…or maybe a spatula or fly swatter. Whatever. It was pretend.

What can I say? The most “fighting” experience I have is a couple of Tae-Bo workouts and movies like 300 and Rocky.

Now, this is where I’d be truly horrified if I had a camera recording me while I wrote. I’m sure the look on my face when I’m typing out a death scene, or a confrontation between two friends, or a girl being dumped by her knight in shining armor is priceless.

Cringing, wincing, frowning. Perhaps gasping for air or pretending to weep. Sometimes I’ll go over to a mirror and study my expression closely to make sure I’m portraying a certain emotion “correctly”. Crinkled brow, wide eyes, slightly parted lips, etc. Once I’m satisfied I’ve nailed the right look, I’ll run back to my computer and describe what I saw in finer detail.

Oh, just wait. It gets better.

A lot of my brainstorming and scene plotting occurs while I’m driving to and from work. As I hit the road, I pull up my “book” playlist on my iPod, sit back, and let my imagination open up. Eventually, a song comes on that strikes inspiration. I eagerly crank up the volume and start creating a scene in my head, or embellishing one I’ve already written. While the song plays, I add depth to the scene–add emotions. Anger, sadness, heartache, whatever. When the song ends, I punch the replay button and listen to it again, this time adding more depth, more emotions…And you know what’s happening the entire time I’m doing this?

You got it. I’m wincing and frowning and fake weeping in my car while the buddy parked next to me at the red light is wondering, “What the hell is wrong with that chick?”

I really should invest in tinted windows… 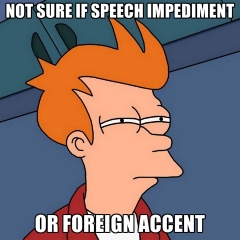 As you can see, I’m fairly fluent in Accent. Give me any dialect and I can speak and write in it. Aye, it’s bloody hale ehzay, mate!

Okay, okay, I suck at writing with an accent. In fact, my ridikulos dialect skills was the original inspiration for writing this confession. I was working on some dialogue for an Irish fella in a manuscript and started saying his lines out loud to help myself “hear” his accent better. I was enunciating every word, every syllable, every letter. About three lines in, I abruptly stopped, horrified and amused by my lame attempt to mimic an Irish brogue.

Honestly, if my computer could speak, it would politely ask me what planet I was from since it failed to detect any similar linguistics on earth. I swear, I’m like Joey on Friends when after 20 hours of dialect lessons, his southern accent still comes out Jamaican.

I suppose if I must act like a fool to create a good story, then I’ll suck it up and do it. I’ll just always pray there’s no hidden cameras on me :-). So, how about you? Do you have method writer moments, too? If so, how would you judge your performance? Two thumbs up? Or get-that-camera-off-of-me–now!?

16 thoughts on “Confession: I’m a Method Writer. A Foolish One.”