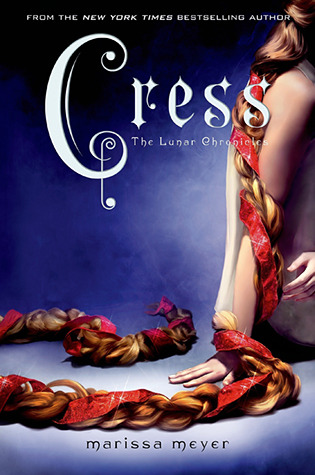 “Rapunzel’s tower is a satellite. She can’t let down her hair—or her guard.
In this third book in the bestselling Lunar Chronicles series, Cinder and Captain Thorne are fugitives on the run, with Scarlet and Wolf in tow. Together, they’re plotting to overthrow Queen Levana and her army.
Their best hope lies with Cress, who has been trapped on a satellite since childhood with only her netscreens as company. All that screen time has made Cress an excellent hacker—unfortunately, she’s just received orders from Levana to track down Cinder and her handsome accomplice.
When a daring rescue goes awry, the group is separated. Cress finally has her freedom, but it comes at a high price. Meanwhile, Queen Levana will let nothing stop her marriage to Emperor Kai. Cress, Scarlet, and Cinder may not have signed up to save the world, but they may be the only ones who can.”

Well, that about sums up my feelings for Cress. Yippy, ya-hoo, woo-hoo, yea, yeah, yes! Seriously, can Marissa Meyer write a bad book? I mean it. I thought Cinder was great, Scarlet was amazing, and now Cress? Wow! I’ve never read a series that gets better and better and better. Not only is the story itself evolving at a highly satisfying pace, but it’s building upon a cast of characters that are some of my favorite characters of all time!

I won’t lie, Scarlet and Wolf remain my favorites in The Lunar Chronicles (and I was a little bummed those two didn’t play a more prominent role in Cress). However, I absolutely loved the main duo in this book: Cress and Captain Thorne. 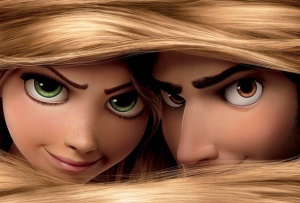 I can’t even begin to tell you how endearing and amusing Cress is. This Rapunzel inspired character was a perfect combination of sweet and naive, and edgy and brave. Half the time I wanted to laugh and shake my head at her daydreamin’, romantic fantasies, while the other half I wanted to give her a high five and thank her for not being a total damsel in distress.

“A roar clawed up from her throat and she swung her elbow, as hard as she could, landing a solid hit against his jaw…She didn’t check to see if he was unconscious, or if she’d given him a heart attack, or if he was in any shape to get up and follow her. She wrenched open the door and ran.”

If you read Scarlet, then you’ve already been introduced to Captain Thorne. And if you didn’t fall in love with him then, I promise, you will in Cress. Through countless adventures and an unfortunate accident, Captain Thorne proves to be more than a charming, arrogant, self-centered fop. He shows us he’s also a genuine, patient, caring guy. And a man of his word.

“I’m going to die. And I’ve never been kissed.”

“We were going to have such a passionate romance, too, like in the dramas. But no–I’ll die alone, never kissed, not once.”

…”I promise, I will not let you die without being kissed.”

Yeah…I think that calls for another dippy sigh, right gals? 😉

Really, everyone, I could go on and on and on about this book and the rest of The Lunar Chronicles. So, I’ll save my breath and simply urge you to go read it. Go read all of them. Now! Move it.