So, as most of you know by now, I entered NYC Midnight’s Flash Fiction Challenge 2013. This is a “competition that challenges writers around the world to create short stories (1,000 words max.) based on genre, location, and object assignments. Each writer will participate in at least 2 writing challenges and as many as 4 depending on how well they place in each challenge. When the competition begins, writers are placed in groups where they will be judged against other writers within their same group. Each group receives its own unique genre, location, and object assignments.”

This weekend, the competition kicked off. And I was DEFINITELY challenged!

I awoke Saturday morning, excited and nervous to open my email and see what my first challenge assignment was. I wasn’t too worried about what my location or object might be–those things are malleable and fun. I was, however, terrified to see what my genre would be. My comfort zones are mainly suspense, fantasy and sci-fi. Horror, even, if I had to. This is what I got:

I literally laughed out loud I was so dismayed. Romantic comedy? Dear Lord, save me. I sat staring at my computer, haphazardly running through the few chick-lits I’ve read (all Sophie Kinsella) and the many romantic comedy films I’ve viewed. Both seemed to share the same general formula:

Boy/girl meet. Boy/girl don’t get along and bicker in comedic ways. Boy/girl have an epiphany and start to fall in love. Boy/girl have a BIG fight and stop talking. Boy/girl realize they can’t live without the other. Boy/girl proclaim their love and get married and have many, many babies.

Happily ever after. The end.

Easy, right? Uh, no. This all works when you’re reading a 400-page novel or watching a two-hour movie. There’s time to introduce the couple, connect them in comedic yet endearing ways, formulate a conflict that will eventually drive a dagger between them, and then build a love strong enough to overcome that conflict…all the while building towards an ending that’s satisfying. But how do you do all of that in 1,000 words? In a swamp (hot!)? With an RV (hotter!)? 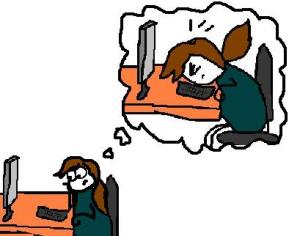 I didn’t know how difficult this was actually going to be until I started writing. I made it through my couple’s first meeting and glanced at my word count: 910.

I continued writing anyways. I didn’t have time to be the perfectionist I am. I just needed to get a story down. The chopping and revising could come later. So, I wrote and wrote and wrote, until, finally, I had a story. A crappy story, but a story. Then, I started the nasty process of revising–chopping, adding, chopping more, adding more…I was in a war with my keyboard all day. Finally, around 7 P.M., I had a solid draft. I took a deep breath of relief and sent it to my two critiques–my mom and sister, romantic comedy gurus.

My mom’s initial response? “It’s good. I’ll call you.” (AKA, it sucks and I want to tell you why in the nicest way possible.)

My sister’s response came via email a few minutes later:

“Its ok. It feels like you go from her hating him to all of a sudden a connection. I think you’re trying to squeeze too much in. I’m not really sure what to do differently. I guess its just not jaw dropping to me or really even comical. It’s almost as if you need a side kick with her that provides more of a comic relief. The two of them alone is rather weird I think.

Also, is Ali a guy or a girl alligator? Little confusing.

Okay, time to panic. I’d just spent an entire day writing a story that was no good. I’d wasted almost the first 24-hours of my precious 48-hour timeline for the competition.

Exhausted, hungry and on the verge of tears, I curled up on my couch while my mom came over and tried to assure me the story wasn’t that bad and didn’t need to be totally rewritten–the basic plot just needed some work. I laughed bitterly. When you need to revise the root of a 1,000 word story, you’re rewriting the whole thing. It’s not a novel. It’s not like one chapter sucked. The WHOLE story sucked.

I ate some dinner and calmed down enough to start brainstorming. Throughout the day, as I’d worked on Swampy Crapville (not the actual title…though that probably would’ve been more interesting than the story itself), I kept thinking about a trip to Florida I’d taken with my family. We had to drive from Miami, through the Everglades, to the Gulf Coast (that’s the most swampland I’ve ever seen; we don’t have real swamps in Colorado.). As we drove past the dense, misty, jungly marshland, we kept asking each other, “How much money would it take for you to hike a mile through that?” It doesn’t sound like a big deal, but staring at those swamps with all those vines and bugs and snakes, we agreed it would take at least a million bucks.

I mentioned this memory to my mom. As she chuckled, I started thinking about it more and more, and before I knew it, I had a brand new concept for my story. I pitched it to my mom. She loved it. So, I started writing, reading her excerpts as I went. She was laughing and nodding at everything I wrote. I suddenly felt much calmer knowing I at least had a doable concept. After she left, I kept writing. By midnight, I had a complete rough draft (500 words too long, but whatever). Unable to keep my eyes or brain awake, I went to bed.

Tension and anxiety woke me up at 5 A.M. I could feel the clock ticking. 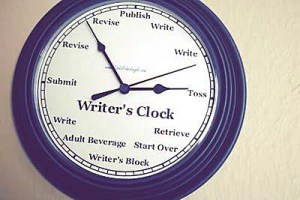 I got up and went downstairs to start revising. A few hours later, I had to stop because I volunteer in my church’s nursery every third weekend (and, as fate would have it, that was this weekend…grrr). The unwanted interruption turned out to be a blessing in disguise, because when I returned home, I was able to revise freshly, quickly and efficiently. I sent my mom the first full draft of Muck and Mire. Her response: ok!!!!!!!!!!!!!!!!!!!!! Ten million times better- I love it.

Talk about a relief! With her hard won approval, I started the revising process again (chop, chop, add, add, chop, chop). I whittled the story down from 1,300 words to 998. I sent it back to her. Approved. SUCCESS! I took a brief break before doing one final read-through. Then I took the plunge and submitted it. The moment I hit the send button, I felt like a bag of bricks had been lifted off my shoulders. I was so happy, thankful, grateful…It was over! I’d finished.

Now, is it the best story of all time? Noooo. Will it win this first round of the competition? NOOO! Honestly, I’m not even sure if I’ll place high. I took a risk with the format and it could either hurt me or help me. I just don’t know. But I do know that I’m proud of myself for accepting the challenge, finishing it, and turning in a story that I feel good about. I thought it was funny and–hopefully–romantic enough to qualify it as a “romantic comedy”.

Due to certain parameters and precautions of the competition, I won’t be posting the story quite yet, but here’s the brief synopsis:

A popular TV show unites two strangers, Jack Sharp and Lucy James, as they race against other teams across the Shitsowami Swamp for ten million dollars. Inside the misty bogs, the pair discover snakes, gators and even love.

Fingers crossed! And, as always, good vibes and prayers are appreciated 🙂

11 thoughts on “Victory. First round of Flash Fiction Challenge 2013 complete.”